Starting from a pub we follow a trail set by one of us, as a hare, for an hour or so. Finish up back where we started, having worked up a thirst, to go into the pub to enjoy a beer or two. Makes sense ?? It will if you give us a try.

Any level of fitness is ok, we are not serious runners !! 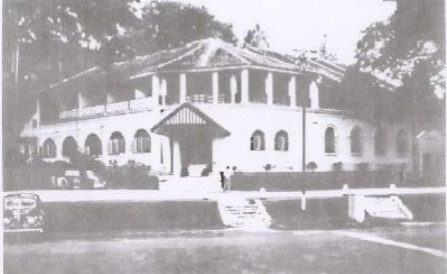 The original "Hash House" in Kuala Lumpur circa 1938

Why is it called a ‘Hash’ ?
The ‘Hash House’ was the name of the restaurant in which the founders of the first group met after their Monday evening run. The first runners were serving British Armed Forces personnel in 1930s Malaya.

Why Mersey Thirstdays ?
Hashing is an international activity, with groups in every continent – 2000 or more around the world. Our founders had hashed elsewhere in the world and wanted to bring the hashing experience to the Liverpool area – which is, after all, a sporty city. So, in 2006 a group of colleagues decided to create Mersey Thirstday Hash House Harriers. From time to time, we run abroad and in other parts of the UK (individually and as a group) and regularly welcome new runners as well as visitors from other groups.

Who are we ?
Although founded by members of the University of Liverpool, we are an easy-going group from many different walks of life. We like a laugh and enjoy the camaraderie and the challenge of a chalk trail come rain or moonshine.

Why run like this ?
A trail is a puzzle that engages your brain when running. When the group arrive at a crossroads there will be a ‘check’ – a circle marked in chalk – if you feel energetic, you can ‘check out’ one of the paths, if you have found the right one you shout ‘on on’, indicating that you are on trail and you lead the runners until the next check. This is the self-regulating nature of this type of running integrating runners/joggers of different levels of fitness who all start and finish at the same time. More than that, it means that you can do as little or as much running as you like (you could simply wait at the check if you like and let the others do the checking). No one gets lost because the runner who sets the trail follows up at the back.

Do I have to have a drink ?
No. Many of us come in cars (where coats and changes of clothes can be stored for the duration of the run). We are not a hard drinking club. Soft drinks and water are available as well as beer.

How much does it cost ?
£2.00 per run, which covers the costs of a drink (soft drinks also provided) and snack food after every run - grapes, brie and baguette, dips and crisps and the like, with BBQs and hot food from time to time. Any surplus subsidises special events. Your second run with us is free.

Who can come along ?
Anyone! Anyone with a sense of humour, a pair of trainers and a residual level of fitness is good to go. Under 18’s can run with us if they bring an adult. Dogs are welcome too, if they bring their owners. If given notice we can make short cut arrangements for those who want to criss cross the trail at walking pace. Some people even do the run on a bike!

From where do we run ?
The start (and the run) is different every week, but almost always within walking distance of a Merseyrail station. We don’t only stick to roads, we run down alleyways, footpaths, beside and through hedgerows, so you get to know your city region and its byways really well. And sometimes we venture out into suburban and semi-rural areas, too.

Any questions ?
Email 10 seconds dij@liverpool.ac.uk - or just come along to the next run.

Back to top of Page

Get social with us